No point in describing the dance of Victor Kossakovsky across the stage – the camera did its best to catch him and missed. No, ok, I missed from my static seating position. A little lesson here in how to interact with a film-maker with the fanciest footwork I've ever seen. Either his feet dance with his thoughts, or vice versa. Anyway, unable to move with him and get the photograph I wanted I shifted and cursed in my front row seat for the first 10 minutes, watching the official photographer move around him with inconsolable jealousy. 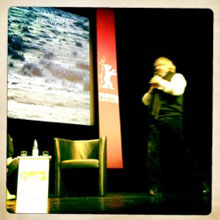 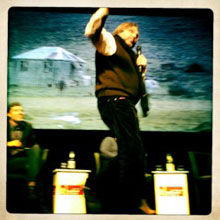 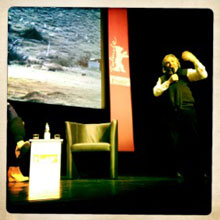 Berlin – one day left of freedom

I wake up in a small hostel room, having left Tali's flat in East Berlin. I am nearer the centre now, near Hauptbahnhof. Happily the hostel changed my booking from a 6-bed dorm to a 2-bed room, and my room-mate, the morning light reveals, is none other than Tamara Scherbak, an experimental film-maker from Canada who I already know from the talent campus at Reykjavik. More importantly, as anyone who has shared a room in a hostel will attest to, she does not snore violently.

I have one more day of freedom before the Talent Campus starts and have been warned that, once it starts, there is barely any time to watch films let alone explore. So I bolt out of the hostel early to make the most of things. It is slightly warmer: all omens are good.

One day from the Berlinale now and the sadism in the air has condensed into snow.

People walk around pretending its ok – but I know better.

Here's three of them as seen from the window of ex-ECA classmate and Bridging the Gap film-maker, Tali. Notice how these three lunatics have left their houses to promenade through the polar-powder, jauntilly and purposefully and, in some cases, pouting to whistle bravely like nothings wrong at all. Unfortunately the man with the hat on the corner had been in mid-stride for 3 hours. That's where bravado gets you.

Having finished my copy of Stasiland I now feel ready for a stay with my ex-ECA film making buddies Tali and Johanna in East Berlin. I am hugely excited about the Berlinale Talent Campus. Guest speakers include Kossakovsky, Juliette Binoche, Herzog and Mike Leigh. And the company of 300 other 'New Talents', from all walks of the film making. For what it's worth, I'll also be spilling the beans on new films at the Berlinale.

On arrival in Berlin the moisture in my nose freezes on the short one minute walk to the airport station. An odd sensation, like having badly mixed concrete in the nostrils.

It is -18 degrees. Some say -22. The numbing cold rises rapidly up from feet to stomach. It is too cold to remove my hands from their pockets to hold the map I should be following. Better lost and moving than still and searching. My mind jumps to the lesson of Oates, the bloke who travelled with legendary 'Scott of the Antarctic'. Childhood stories say he insisted on letting the cold kill him whilst walking into the Wilderess, rather than dying standing still. Now I understand. I understand Oates. While there is movement there is hope.

The 9th Berlinale Talent Campus (BTC) took place February 12-17 2011, in Berlin as part of the International Film Festival, now in its 61st year. The lucky group of 350 participants who gathered in Berlin, were selected from over 4000 applications and hailed from 88 different countries. The purpose of BTC is to bring together up-and-coming filmmakers and around 150 experts for a series of masterclasses, workshops and networking events over the course of six days.

I was one of the lucky ones, and together with two filmmaker friends from Edinburgh, I made my way to Berlin on 11 February. Not only did BTC cover the cost of our flight, they also put us up in a city-centre hostel. It was a nice place, but we didn’t have very much time to spend there as BTC is 6 days of intense attending and socializing. I don’t think I made it to bed before 2am every single night.