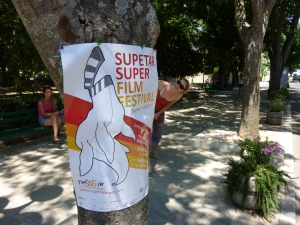 Last year Adrian McDowall and myself were invited to the beautiful holiday island of Brac in Croatia to show our films Ma Bar and Standing Start on an outdoor screen for the very first Supetar Super Film Festival. We found out that Scotland and Brac have something in common apparently - we're both reknowned for being tight! I'm not sure this is true but they thought it would be the perfect idea to invite us back as we have 'so much in common'!

This year I programmed 13 films from the Scottish Documentary Institute's back catalogue including one feature doc, The Edge of Dreaming by Amy Hardie.

The screenings took place in the church yard in the oldest part of Supetar on a huge screen made from a ships sail. I was charged with the task of bringing uplifting films to the programme for an audience which is made up of an eclectic mix of young and old, holiday-makers and doc enthusiasts alike. In some respects like the Scots, the Croatians are quite a reserved bunch but the response on the whole was pretty good to the little piece of Scotland I took across to the island of Brac.

The Croatian retrospective part of the programme was selected by legendary Croatian National TV documentary selector Đelo Hadziselimovic who selected some fantastic short films from the 70s - my favourite Small Village Show about a beauty pageant held in a tiny village in Croatia where the teenage girls looked less than happy to be up there on stage and judged by a mostly male audience! It's great to see these films which give you a huge insight into Croatian culture. 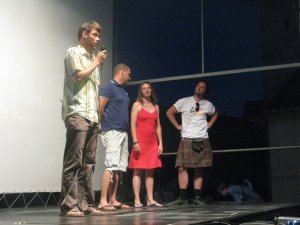 As part of the programme I invited Scottish based filmmakers Anne Milne (Maria's Way), Julian Krubasik (Melissa Immaculate) and Carol Salter (Unearthing the Pen) and I conducted some Q&A's with each. Apparently this is something most Croatian film festivals do not do but I couldn't resist getting the filmmakers up to give a unique understanding of the film they have just watched - this can be the highlight of a film festival for me!

It's great to see so many people so dedicated to making this festival work with so little resources and support.

Check out the full programme here.