Creating a Maieutic Machine - Or the Birthing of Decisions

adjective; "of or relating to the method used by Socrates of eliciting knowledge in the mind of a person by interrogation and insistence on close and logical reasoning";
from Greek maieutikós, "skilled in midwifery"

"The less we know, the more we believe in science," says Paolo Quattrone, Professor of Accounting, Governance and Social Innovation in Edinburgh.

As an accountant, you'd think he'd be into numbers and science. But as I wrote in part 1 of this Blog series - Numbers Don't Speak for Themselves, he believes numbers need to be injected and interrogated with doubt: through words, pictures, moving image, music. Paolo is searching for a new way to represent the Annual Accounts, the grand narrative of the corporate world.

What if corporations let us interpret their numbers like a film, with multiple meanings? Paolo points out that the word "fact" comes from Latin facere "to make" – so the word inherently betrays its seemingly scientific notion. Therefore, how we arrive at facts is always a process and never an end point, and the influence of disciplines other than science on our knowledge base and decision-making is vital – perhaps even reinvigorating.

During Paolo's event Numbers, Governance and Leadership and in his research(1), Paolo refers to religious practices and the Jesuit Order. In particular, the "inventory of the self" ritual, which is part of a self-reflection process required for Jesuits, leading to illumination. Every day of the week you report on a score card when and which of your deeds were good (top line) or evil (bottom line). Illumination remains the aspiration, becomes an act, a daily doing. 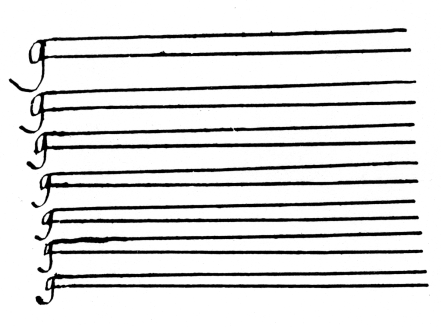 (The g in every line stands for giorno, “day”.)

Then Paolo shows us the schematic layout of a church, which displays a liturgical procession. He explains how the experience of walking through the various areas of the church becomes a physical understanding of sacred knowledge. The sense of walking the church as if reading a text, depending on the route one takes to get to the altar, reminds me a little of Michel de Certeau’s The Practice of Everyday Life(2), in which he looks at the city as a text and a space in which meaning only emerges through the pedestrians walking it. (And maybe not by coincidence, de Certeau was a practicing Jesuit, who once planned to live as a missionary.) 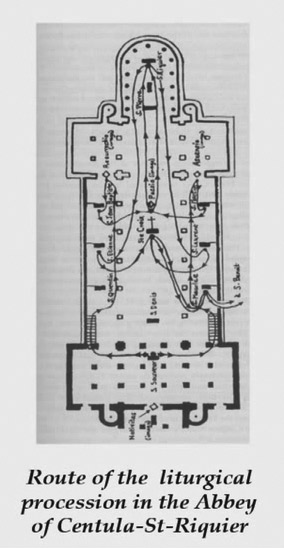 Inventory comes from inventio, “figuring out new solutions”, Paolo points out. So our method of counting and ordering, which is part of making an inventory, is really a tool to figuring things out, not a mere listing of assets, deeds or "facts". Through the practice of the Jesuit liturgical procession, the ritual of the self-inventory, and the sheet on which it is noted down (another "visual performance space"), Paolo has developed a schematic which he calls the "maieutic machine"(4)(5) (my doodle): 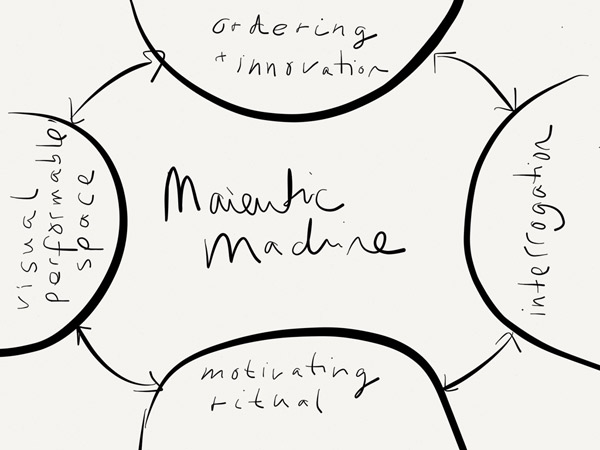 The Making of a Maieutic Machine

The maieutic machine becomes a process, a space and a dialogue at once: We (the individual, the company, the organisation, society at large) need a "method of ordering and innovation" (to rake or not to rake the sandbox, to order by number, size, type, unit, with new tools?), means of interrogation and mediation (how do we govern, elect, decide about our ordering methods), a motivating ritual (how and how often do we motivate ourselves to meet and undergo this process) and a visual "performable" space (the "balanced score card", the indicated outcome reports, the sandbox, the cashbox).

The bigger the organisation, the harder it is to find the rituals and spaces for dialogue amongst us. In the Jesuit Order, two people – the Procurator and the Rector – had a key each to the cashbox. Without using both keys and talking to each other, no expenditure could be made.(1)

We know that the biggest entities (governments, corporations) are prone to taking short cuts: cultural and sexual uniformity make rituals and decisions easier: aka “the boys' club”. The percentage of women represented in boardrooms keeps lingering around 5-20% globally(6), and only around 20% in parliaments worldwide(7). How on earth are we to tackle gigantic problems, with the limited horizons of middle-aged white males in consensus?

Maieutic as in "pertaining to midwifery" is a lovely way of narrativising this process. Paolo lays it out as a challenge to the CEOs in front of him. The maieutic machine doesn't need steely 'forceps'; it contains the much more feminine magic of birth assistance. I would even like to call it the maieutic womb – as a sacred space of highest creativity, and intimately known to us all.

For our decisions to be birthed in this way, the task is to "rule the method, the rules of engagement but not the decision," Paolo says.

Isn't this what good art – a good film – does? It gives us the mise-en-scene but doesn't tell us what to think. The Act of Killing – a film which deals with inescapable humanity in deepest depravity – was both lauded and criticised for its storytelling approach. By choosing the "visual performance space" of real people re-enacting their crimes during the Indonesian genocide, it holds a very uncomfortable truth, both formally in the film's design, and emotionally by challenging our conscience beyond the simple duality of good and evil. To be human is neither/nor; it's an act. It's this ability to hold this dilemma that often lifts indie films and documentaries into a different realm from mainstream entertainment.

Designing a new visual performance space and the rules of engagement in film is perhaps a bit like the Bechdel Test, or Dogme 95. Other films are possible, if we agree they're important, and draw up new rituals. As to the business of films - it is unknowable what a new generation of women will achieve when consistently exposed to more equal and less sexualised portrayals of women. We cannot measure that with box office stats, or even engagement metrics. (But powerful women in films do translate into box office.)

Let me end with this quote, attributed to Alfred P. Sloane, which looks with suspicion at uniform consensus, the likely status quo in white, male boardrooms, or what we consider to be mainstream:

“I propose we postpone further discussion of this matter until our next meeting to give ourselves time to develop disagreement and perhaps gain some understanding of what the decision is all about.”

If we're able to champion process, diversity and dialogue before consensus, and before the simplicity of numbers, then maybe we have a chance in our multilateral world to tackle deep-seated problems. And maybe it will put the value of art and humanity truly centre stage.

(6) Women in The Board Room - Deloitte Report

(7) Women in National Parliaments. Compiled by the Inter-Parliamentary Union