Diaries from an intrepid filmmaker (13)

While camping in Canhabaque, we did not get a minute of solitude. Our tent became a point of entertainment for children and adults. Whenever we got back to base we had to switch on the generator in order to recharge batteries. Of course we were greeted by a long queue of people wanting to recharge their mobiles (mainly used to play music) and another long queue hoping to watch TV. It appears there is an association between the sound of a generator and television. Meal times were a bit tricky, with 20 pairs of eyes looking at everything we put into our mouth. We managed to 'consume' 12 kilograms of rice in five meals! 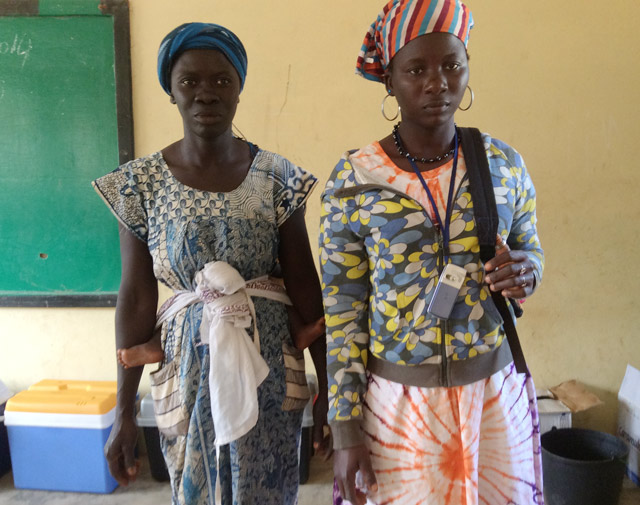 Just before we left we did a quick interview with one of the young women who hung around us. Marianna is 20, and her dad has been away for several months to do his initiation. He too appeared at our door step and she was taken aback to see him. However, tradition does not allow him to talk directly to his wife and children. He needs to use a child as a messenger to pass along updates. The sad thing is that even once his initiation is over, he will not be allowed to return to his wife and children. He will have to marry again. This part of the tradition is now being questioned by many young men who emotionally suffered from that rupture of family.

On our way back from Canhabaque we stopped on another small island, Rubane. Rubane is owned by the village of Bijante where we have been filming. It is a sacred island where people from Bijante are only allowed to stay during the cultivation of rice. However, now two luxurious hotels (a pity our budget cannot pay for a weekend break there!) have been built because the chief of Bijante who controls the land on behalf of his people allowed the hotels' owners to build them – in exchange for corrugated iron roofs for all houses in Bijante! 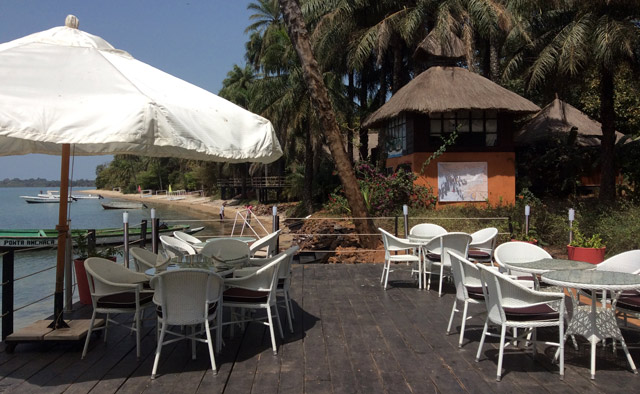 What money can buy!

This is a huge transgression to Bijago rules and sets a bad precedent without really benefiting the village. It does not create jobs (it is a French hotel with mainly Senegalese people working). It also questions the integrity or naivety of the chief of the village. Unfortunately, he is dead now, and the new chief has not been sworn in and therefore cannot comment. I doubt he would anyway.

We went there because the hotel also owns several small planes. We want to attempt to do some aerial views of the archipelago on our last day and return to Bissau without spending another 12 hours on a boat. We need to find a way to rig one camera. We really look forward to flying above the canopy of the archipelago.

But today we very much stayed on the ground. We filmed the transportation of the newly-built canoe to the sea. About 30 men were to carry the canoe, each of them arguing about the best methodology for carrying it. Should the tall ones be at the front or the back, that is the question! At the end they opted for a mix...

To start with, they rolled it on sticks and it all went smoothly with a camera at the front and another one at the back, but then, half-way through, they picked up the canoe on their shoulders with myself and Madalena running at the front in order to create a distance between them and the camera, not expecting them to start running behind us, leaving Luis and Adao at the back running after them... not the best camera work!

The canoe was then put to the water, forcing both cameras to go in the sea in order to turn their backs to the sun. Sea water is not the best way to treat tripods! 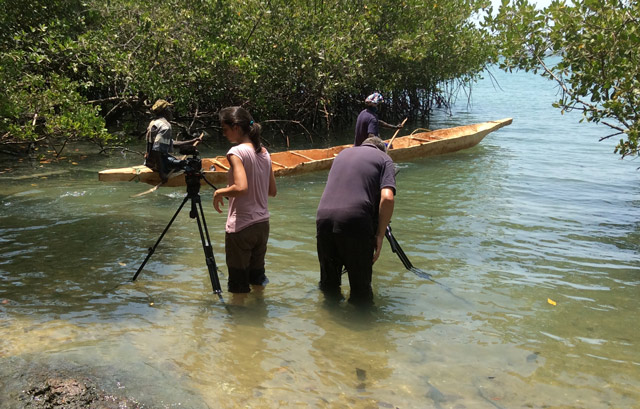 Every night when we return to our base, not only do we need to clean lenses thoroughly because of the dust but also download all the memory cards (we do not have a DIT) and – our nightmare – recharge batteries. Public electricity only gets switched on around 8pm, and we can no longer use it because it has some crazy voltage, so much so it managed to blow our converter. Now the only way is to put our generator on, but lately there has been fuel crisis... All those things to plan and manage!

I keep making lists even in my dreams.