Adventures in Amsterdam through the eyes of our IDFA delegates

A mighty delegation of Scottish filmmakers descended on this year’s IDFA, joined by members of the SDI team, including our new Assistant Producer Tricia Brown. Tricia caught up with some of the Creative Scotland bursary-awarded delegates to ask them about their experiences. 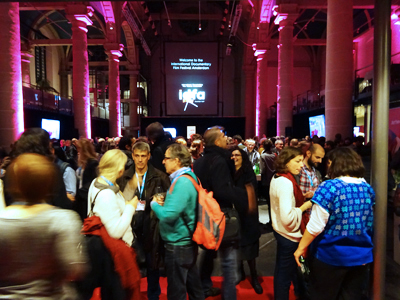 Documentaries should be an insight into the beautiful properties of our world before it disappears.

This was an observation from Nick Fraser during his first on-stage interview since departing the BBC. Time is our most valuable commodity and it’s the task of the documentary filmmaker to capture it before it’s gone. With that in mind, it was a special thing to be surrounded by people who spend their time capturing moments that empower and motivate us to find better ways of using our own time. Ironically, I realised this as I rushed about, forever glancing at my IDFA itinerary to make sure I was using my own time well (#FOMO).

I thoroughly enjoyed my first IDFA, having been out of the doc world for about a year, before SDI drew me back in. The festival is the ultimate boiling pot of doc industry pros, and I’d already been introduced to many of them and heard about their incredible stories and IDFA strategies. I was pleased to have had the chance to watch six films, Q&As and several industry talks, navigate my way through the vast ‘Guests meet Guests’ drinks event and experience the (in)famous SDI whisky night!

A highlight for me was Notes on Blindness, the 20 minute VR version available to see at the DocLab. It was magical and intimate, and moving by virtue of its beautifully illuminated illustrations and touching, observational narrative. During one episode, only where you tap your headset to send out gusts of wind are the objects in its path revealed to you, a mesmerizing way to convey John Hull’s point of view that where there is no sound, that part of the world does not exist if you cannot see. And I was moved to tears by Maya Angelou: And Still I Rise. It was a privilege to listen to her stories and spend time in the company of such an awe-inspiring woman.

A few years ago, I remember Samsung’s ad campaign slogan was “impatience is a virtue”. I always found that quite disturbing, the advance of technology sending us on an inevitable trajectory towards a faster and faster future where time is considered even more of a luxury than it is now. But watching a documentary, we have to stop, sit still for a couple of hours and spend time in someone else’s shoes. We’re encouraged to empathise, to escape our own bubble and to gain a sense of perspective. I love that the ultimate result of the fast and furious IDFA is a product that slows us down.”

My strategy was to at least have one meeting with a potential producer and I accomplished that. So it was double thumbs up from this Scot/Texan/Italian.

The first person I caught up with was Scott Calonico of AD&D Productions.

I saw movies about subjects that ranged from Chilean grave diggers, to French construction workers, from Swiss farm girls to Romanian animation. Highlights were finally getting to see Tower - I attended UT Austin so I knew all about the Tower Sniper shootings and knew people who worked on that project. I wound up really enjoying Citizen Jane about Jane Jacobs, an architecture critic and author of The Life and Death of American Cities. The film even had a shout out to the French Brutalist architect Le Corbusier which tied in nicely to my Bridging the Gap film about the Banana Flats in Leith. My strategy was to at least have one meeting with a potential producer and I accomplished that. So it was double thumbs up from this Scot/Texan/Italian. Mainly it was good just to get out there in the market and see what other people are working on. Very inspirational and I hope to return next year.

Victoria Thomas of The Polka Dot Factory told me about how this year's festival compared with previous years.

I had been to IDFA as part of the academy a few years ago so I had some awareness of how things worked. The difference this time, is that I had a goal and a clearer idea of what I wanted to accomplish. It was a great balance of films, fun and business as I managed to have the meetings I needed, watch a few films in between, meet new people and reconnect with the film festival friends that you tend to bump into annually at a market. It started with the whisky sampling and watching two films that affected me profoundly. Skulls of My People by Vincent Moloi and The Grown Ups by Maite Alberdi. Skulls of My People because I felt that it was a story that I was supposed to know but did not know about a significant event in African history and this was a harsh reminder of how the uncomfortable aspects of the history of the continent is edited and erased from public knowledge. And in The Grown Ups by Maite Alberdi, I was forced to confront my own prejudices because it made me realise that like the Chilean government, I had also failed to see past the scientific definition of Down’s syndrome and underestimated the capacity of people with Down's syndrome. 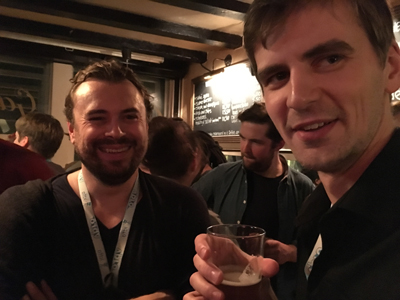 Duncan Cowles of Relative Films told me about his IDFA strategy.

Being in development of my first feature film, my basic strategy was to simply talk to people about the film, both funders and other filmmakers. Now having Creative Scotland and BFI supporting my project, it's giving the film a lot more momentum and I'm able to discuss the film with potential co-production partners and future broadcasters. I'm too early for any real commitment at this stage, but making others aware of the project and it's planned timescale is hugely important for both the project and me as a filmmaker.

I'm delighted to have joined the Scottish delegation, it was a hugely productive trip and I'm grateful to have received the stipend from Creative Scotland & Scottish Documentary Institute!

Ruth Reid of GID Films told me about her IDFA highlights.

There's a warm, diverse and encouraging environment for filmmakers and financiers. You can't walk down the main streets without bumping into familiar faces at every turn. The highlight for me was watching Nowhere to Hide (2016) and meeting with the filmmakers to discuss their project. It's an immensely powerful film that truly deserved to win the prize this year! It tells the story of one nurse in Iraq from the point the American troops left in 2011 until 2015. It's beautifully edited and so intimately filmed that the story feels almost like it could only be fictional.

I prepared for the festival by organising a number of meetings with potential financiers and co-producers. All went much better than I could have anticipated and led to exciting new trajectories for the projects I'm currently working with. I'm delighted to have joined the Scottish delegation, it was a hugely productive trip and I'm grateful to have received the stipend from Creative Scotland & Scottish Documentary Institute! 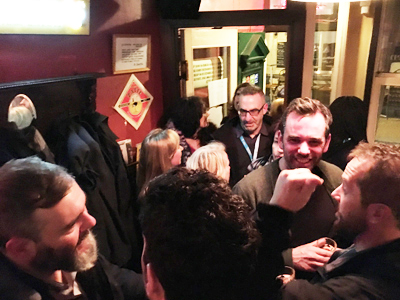 At an induction meeting for IDFA 1st timers I ended up in conversations with Belgian and Catalan filmmakers afterwards – a brief exchange of cards later and already I’m speaking to one of them about working together on a possible co-production idea.

Maurice O’Brien of MorningTop Films told me about the diversity of the International films and filmmakers at IDFA.

What really made a mark at IDFA was seeing all of the documentary filmmakers in attendance from Latin America, as well as the amount of Scandinavian, Asian and Polish filmmakers there. It can be very easy to fall into a BBC/ UK/ US-orientated way of thinking about the films we make and the audiences we make them for. But this was eye-opening proof that the whole world is interested in docs and there is most definitely a worldwide market for factual stories, if you can just figure out how to make your story universal without losing the unique flavour that makes it stand out in the first place.

At an induction meeting for IDFA 1st timers I ended up in conversations with Belgian and Catalan filmmakers afterwards – a brief exchange of cards later and already I’m speaking to one of them about working together on a possible co-production idea.

The first film I saw during the festival was All These Sleepless Nights, a festival circuit hit about young clubbers in Warsaw set to a fantastic soundtrack. As always, a Q & A with the director afterwards added a whole other layer of richness to the experience – especially with a film like this which blurred a lot of boundaries between what might be considered fact and fiction.

And a good place to finish is Maurice's experience at the Scottish delegation whisky night.

I felt proud looking around the room and seeing the other members of the Scottish delegation, all of whom had made great work. I was also proud that Anthony Baxter ‘You’ve Been Trumped Too’ and Paul Fegan’s ‘Where You’re Meant to Be’ also had films showing at the fest. Unsurprisingly, the Scottish delegation drinks lasted slightly longer than the standard 45 minutes of most such events. Indeed, one of the more surreal highlights of my Amsterdam trip was ending up in the early hours, slightly worse for wear, sharing chips and heatedly discussing the merits of Van Morrison with the star of Where Your'e Meant To Be, Aidan Moffat (who’s not a fan of Van the Man we can safely say).